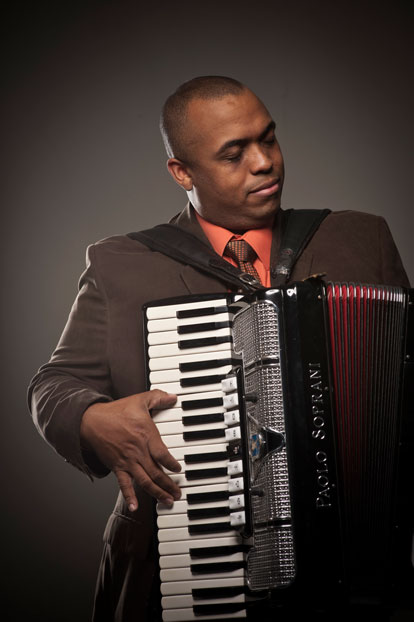 Corey Ledet was born and raised in Houston, Texas, but spent his summers with family in small-town  Parks, Louisiana. The Creole culture has its roots in Louisiana, but spread across the country, including neighboring Texas. Because of this, he was able to be immersed at all times in the Creole culture he loved so much. The summers in the family home molded and shaped Corey’s world in a profound way.

He learned everything he could so that he could incorporate the culture in all areas of his life – the traditions, the food, and most importantly, the music.

His love for the Creole/Zydeco music was instant and hard for him to ignore. He studied the originators of the music such as Clifton Chenier, John Delafose, and Boozoo Chavis. He branched out to include studying any (and all) artists of Zydeco.  At the early age of 10, he picked up shows playing drums for Houston-based band Wilbert Thibodeaux and the Zydeco Rascals and slowly learned the main instrument of the music – the accordion. He came to truly love any type of accordion – the single-note, triple-note and piano key accordions – and any others. He worked at building his skills until he knew each one fluently.

By the time he graduated from high school, he was certain that music was the focal point of his future. Corey eventually moved to Louisiana in order to be surrounded by this beautiful culture at all times. He remains true to his roots and earnestly searches for ways to include them in his music. He keeps one foot firmly in the tradition while exploring surrounding influences in order to create the best of both worlds. He is able to infuse old and new styles of Zydeco into his own unique sound from all of the people he studied and was influenced by.

He also appreciates the other traditional sound indigenous to Louisiana in Cajun music and has been able to expand his repertoire to include these influences as well. Corey’s versatile sound enables him to please any audience. Whether he is playing a solo acoustical set or he is backed up by a full band, you as a listener will always be thoroughly entertained. He finds joy in giving his listeners a true dance/music experience in the ways of old-time house parties. So, come and enjoy the music of old presented in a new way but still very tied to tradition.  He looks forward to entertaining you!